Beyond the Trenches: Everyday Life in WWI 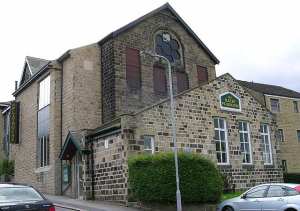 It must be some kind of magic. Four fellas, a violin and a guitar. That’s all. And they were only on the stage of the Ilkley Playhouse for one hour. But the event was as immersive and as deeply engaging as a feature-length film or a full-length novel.

It is a sort of magic that enabled Hugh Lupton and Nick Hennessey to create a whole village full of real people for us, and to allow us to walk shoulder to shoulder with them through the terrible years of World War One. That magic is called storytelling – a skill that they are clearly masters of, and one that was enhanced further by evocative music and song from John Dipper and James Patterson.

The village almost swooned into being, helped by an undulating refrain that ran throughout the evening as each storyteller in turn hypnotically listed the key buildings and places again and again (Manor Farm, Willow Bank, All Saint’s Church, Wickenby Wood, The Rose and Crown). The people of the village were placed amongst these buildings, or climbing over a stile, or sitting down by the river where the head of a single stem of grass had bowed over and was being gently tugged by the flow of the water. It was the many tiny details like this which made you feel you could see it all in front of you.

Describing the horses requisitioned from the village for the war as they stood in a long line, Lupton took an unusual viewpoint through the eyes of the children coming out of school; children who knew each animal like a friend and knew where they were from (the forge, the meadow); this conveyed the ‘wrongness’ of these patient beasts (and the young soldiers) being ripped from their homes and their daily tasks in a way we could feel deeply.

The Rev. Richard Isaac’s narrative held this potentially gargantuan story in place like the metal ring around a cartwheel; first, we saw the whole congregation from the perspective of this uncomfortable new reverend in his pulpit, their faces expectant and as yet unknown to him. The story ended in the same church but with our vicar and his flock having learnt harrowing lessons and lived through loss and pain, and with the Reverend himself having learnt the truth about suffering.

We were soon embroiled in the lives of the men who signed up and went to war; Harry Bell missing his young lady Alice Legget, Billy Bray (“never shaved, but there’s a stiffening to the down on his cheek”), Sam Musgrave (“I’ll be back for Christmas”). The voices of the real-life villagers came through the reading-out of actual letters and documents; Harry Bell’s voice was particularly distinctive as he wrote to his Alice, giving the piece its title when he finished one letter with “Barbed wire for kisses and many coils of it.” When he heard there was snow and ice at home in the village he wrote “We could have had a skate together … we should have had a happy time of it … it’s too murderous to think of.”

We saw one man adapting to the loss of a leg, another to a life plagued by shellshock where nightmares were like “a harrow dragged across my mind”. We saw two old men almost fight but instead break down in tears over the deaths of both their sons; their pain was magnified by a sorrowful song called ‘Just an old man weeping’.

There was humour too. The mild derision of the vicar by the working folk, and the comedy of the men struggling to explain why they wouldn’t let the land-girl help with the business of the stallion covering the mares.

But it was the tragedy, of course, that remained with the audience, and this all-male creative team told some of the most powerful moments of the story through the lives of the women. A letter announcing that a young man had been killed in action was delivered to the wrong door; at first Hannah thought it was for her until she saw the name on the letter was that of her neighbour Lizzie’s husband. Her relief as she hugged her baby, her tears wetting the little girl’s face, was blunted as she looked down from her bedroom window to see Lizzie hanging linen on the line in the sunshine. Poor Lizzie.

Later, along with Charles Birkett, we watched Olive Bell running towards another woman with equally dreadful news. She ran with her skirts held high, into the fields, the smell of cut hay and summer-time all around her. As the two women fell into a dreadful embrace like silent stooks of hay, Charles Birkett knew he would never forget them standing there “as if they carried all the sorrow from every war there’s ever been.” Oh, goodness, it really is impossible not to cry, remembering the violin music rising above this unbearable tableau, a solemn, elegiac tune which tugged at our own hearts as we watched Charles watching the women. It is likely that for the audience at the Ilkley Literature Festival this powerful image will surely be summoned up again, next year, when we each smell that the hay meadows have been cut again. We must thank Lupton and Hennessey for the sensuous strength of this image and for the richness of the story they have created; they have added depth and resonance to the importance of never forgetting the pain and horror of this war; of all wars.

I am on the blogging review team for the Ilkley Literature Festival 2014. You can also see this review on the official festival review website, The Pickled Egg.

Header image of haymeadows taken by Louise Swingler in the Yorkshire Dales.

One thought on “Ilkley Literature Festival: A village at war that reached off the stage and touched our hearts”

Arts and Culture in Yorkshire and the North

Look Around this Writer’s Workroom

Hello – this is me, Louise Swingler – the writer who works in this workroom in the cloud

Hello. My name is Louise Swingler and I welcome you to my writer's workroom. PLease have a look in some of the cupboards and or sit down with a cup of tea for a bit of a read. Thanks for popping in.